A Biblical Perspective of Self-Defense 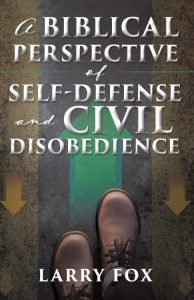 The following is an excerpt from a book by Larry Fox, A Biblical Perspective of Self-Defense and Civil Disobedience (Copyright © 2019)

We’ll begin by looking at the Old Testament. Although we’re not under Old Testament law, it contains the most specific language about self-defense and reveals God’s eternal standards and perspective. The Old Testament clearly states that God created man in his own image and intended for him to rule the earth (Gen. 1:26 – 28). Man’s ability to make decisions and govern derives from his godly image and delegated authority. As we’ll see, man’s God-like nature also leads to strict standards regarding the treatment of people.

Is Killing a Person Always Murder?

This question is at the root of many people’s opinions about self-defense. If one believes killing is synonymous with murder, then it’s never appropriate to use deadly force, even defensively. This is a common argument against private gun ownership, for example.

God said to Noah, “from each man, too, I will demand an accounting for the life of his fellow man. Whoever sheds the blood of man, by man shall his blood be shed; for in the image of God has God made man” (Gen. 9:5 – 6). So God created a system of capital punishment: man was to take the life of whoever sheds another man’s blood. Because God made man in his own image, murder becomes a crime against God and demands capital punishment. There’s no provision in the Old Testament for rehabilitation of a murderer.

With God’s statement to Noah as background, we gain insight to the Old Testament law, including the Ten Commandments. The sixth commandment is a statement relevant to the value of human life: “You shall not murder” (Exod. 20:13; Deut. 5:17). Some of the debate about killing and murder is the result of which Bible translation a person uses. There are two Hebrew words most frequently translated “kill” or “murder”; one primarily means to destroy or kill and the other primarily refers to killing intentionally with premeditation. The second word is the one used in the sixth commandment, so the more precise translation is “You shall not murder” rather than “You shall not kill.”

There are those who view every act that ends a human life as murder and they use the sixth commandment as proof that capital punishment violates God’s will. However, the original language of the commandment doesn’t support their position.

As we’ll see in the next section, God demanded capital punishment for specific crimes. Since murder is a capital offense and he requires people to put the murderer to death, God clearly does not equate killing with murder.

God specified more than one form of capital punishment in the law of the Old Testament, commonly referred to as the law of Moses because God gave Israel the law through him. Stoning was the most frequent method and usually involved the entire community, including the witnesses (Deut. 17:7). Such public execution probably served as a strong deterrent, because people not only viewed executions by stoning but participated in them.

The sword was also a common instrument in capital punishment. For example, at Mount Sinai, when the Israelites worshiped the golden calf, God directed Moses to have the Levites kill the guilty people by the sword (Exod. 32:26 – 28). After Israel occupied the Promised Land, if a community fell into idolatry, every person in that town was to be executed by the sword (Deut. 13:12 – 15).

Death by burning was the penalty if a man married both a woman and her mother (Lev. 20:14) or if a priest’s daughter became a prostitute (Lev. 21:9).

The Israelites were to have judges rule in cases involving bloodshed (Deut. 17:8). This suggests not all bloodshed was punishable, because the judge was to rule whether capital punishment was appropriate. As we see from this list, God mandated capital punishment for a variety of offenses in the Old Testament, which demonstrates the severity of these offenses in God’s view.

Use of Deadly Force

Throughout history, Israel has been surrounded by enemies, but God pledged to give the Israelites victory even if their enemies outnumbered them (Lev. 26:8; Deut. 20:1 – 4). When Israel entered the Promised Land, he even directed them to annihilate the people who lived there, so they wouldn’t encourage the Israelites to worship false gods (Deut. 7:1 – 2; 20:16 – 18). So God clearly sanctioned the use of deadly force by the nation.

When God gave instructions on allotment of the Promised Land, he required them to designate cities of refuge, which were to be safe locations for someone who accidentally killed another. In the descriptions of these cities, we find references to an “avenger” or “avenger of blood.” The avenger couldn’t capture or kill the allegedly guilty person if the death was accidental, as long as he stayed in the city of refuge before he stood trial (Josh. 20:5, 9). If the person was convicted of murder, however, the city elders would hand him over to the avenger to die (Deut. 19:11 – 12). God clearly authorized the use of deadly force by the nation of Israel and by individuals under certain conditions.

We must realize the Old and New Testaments are very different. The Old Testament is earth-based and focuses on human needs for physical provision and protection, as well as civil, religious and moral law. Its blessings and curses are physical and psychological in nature, relating to crops and herds, safety from enemies, physical health and so on. The Old Testament relates to man’s earthly existence in the period before Christ. The New Testament, on the other hand, focuses on repentance and spiritual development rather than physical existence.

The Old Testament defined sin and emphasized outward behavior, but had no power to change human nature. The New Testament, in contrast, emphasizes development of godly character.

In the Old Testament, material prosperity was a sign of God’s blessing. The New Testament describes the poor as blessed because they recognize their dependence on God.

Where the Old Testament promised God would defeat one’s enemies, the New Testament requires loving our enemies and blessing those who abuse us.

The Old Testament promised wealth and prosperity in exchange for obedience. The New Testament examines our stewardship, how we use whatever God entrusts to our care.

In the New Testament, we become members of God’s family, not just recipients of his blessings. We participate in God’s kingdom, not just observe his works. After Jesus’ death on the cross, God lives within us, rather than just visit us occasionally.

Jesus’ Sermon on the Mount addressed an individual’s responses to injustice, not the state’s responsibility for legitimate law enforcement, including the protection of its citizens. In that sermon, he upheld the authority and validity of the Old Testament law. “Do not think that I have come to abolish the Law or the Prophets; I have not come to abolish them but to fulfill them. I tell you the truth, until heaven and earth disappear, not the smallest letter, not the least stroke of a pen, will by any means disappear from the Law until everything is accomplished” (Matt. 5:17 – 18).

The Greek word translated “abolish” in these verses primarily means to destroy or throw down in the sense of declaring it invalid. Jesus said he didn’t come to nullify or abolish the Old Testament Law and Prophets. Instead, he came to fulfill them, showing us their ultimate expression and meeting all their requirements so we don’t have to. Instead of advocating adherence to a set of rules, he emphasized development of godly character.

Regarding Jesus and the law of Moses, consider Paul’s statement in Ephesians 2:14 – 15: “For he himself is our peace, who has made the [Jews and Gentiles] one and has destroyed the barrier, the dividing wall of hostility, by abolishing in his flesh the law [of Moses] with its commandments and regulations.”

At first, this appears to contradict what Jesus said, that he didn’t come to abolish the Law or the Prophets (where capitalized “Law” refers to the first five books of the Bible, which include the law of Moses). But Paul used a different Greek word in Ephesians, which primarily means to nullify. So did Jesus abolish the law or not? By fulfilling the Law and Prophets, Jesus made them dysfunctional or useless in believers’ lives after the cross; that is, the law’s requirements are irrelevant to Christians, though they still apply to non-believers. The purpose of the law was to expose and condemn sin (Rom. 7:7, 13), but after Christ there’s no condemnation for believers (Rom. 8:1), which exempts us from punishment under the law. This doesn’t affect God’s stance on the sanctity of human life, however. There also is no reason to believe this changes God’s general position on self-defense, though the specific provisions of the law are no longer relevant to Christians.

We examined many Scripture passages relevant to self-defense to avoid basing our conclusions on a few isolated verses. We saw the Bible prohibits murder, but not killing. We also saw that ownership and defensive use of weapons are permissible.

While self-defense may not always be the best choice, Scripture instructs us to always do what’s best for others. That includes defending them and maybe even sacrificing ourselves to protect them.

The Bible clearly allows us to engage in self-defense, but there are many other factors to consider, the most important of which is our personal relationship with God. I think this reveals that God allows and even expects each of us to view self-defense differently and take different positions on the subject. We should allow others to do the same.

Find other articles about social issues

4 comments on “A Biblical Perspective of Self-Defense”

Dude, right on there brother.

This article is an excerpt from A Biblical Perspective of Self-Defense and Civil Disobedience, which is available in book stores and online (paperback and ebook).

Looks like you have covered all the bases. I would suggest, If a person decides to defend his person etc., he should take a course from the NRA, or other, in proper use of a firearm. Then one must decide to use the force to the fullest extent. You must be acquainted with the laws of your state and locality. Larry rightly states that self defense is Biblical.

Subscribe to our opt-in email list to download a free chapter from any of Larry’s books and receive periodic email notices of his articles, books and other materials. We will protect your email address, not share or sell it. You may unsubscribe at any time.