Daniel was born 18 January 1853 in a cottage called Ivy Cottage on the southeast side of Brimington, Derbyshire, England. (The cottage shown in the photo.)

He married Kate (Katy) Elizabeth Smith at Mount Zion Chapel in Chesterfield, two miles from Brimington, in the first quarter of 1877 and they had four children: Alice, Ethel, Winifred and Stanley. Alice was born in 1878; Ethel was born in Brimington in 1879. The 1881 census in England, taken 3 April, shows the family in Brimington and Daniel’s occupation as grocer. Kelly’s Directory of commercial listings in 1891 shows a Charles Fox as a “green grocer” in Brimington, so Daniel may have worked in a relative’s store. The family took the steamship Brittanic from the port of Liverpool and arrived in New York on 21 June 1881. The ship’s passenger manifest shows Daniel was 28 years old (occupation listed as carpenter), Kate was 26, Alice was 3 and Ethel was an infant (actually 18 months old, if born December 1879). Ethel died July 1881, a month after arriving in America. Two months later, Winifred was born September 1881 in Kansas; Stanley was born November 1883 in Missouri. Soon after Stanley was born, Katy died from an infection, which was a very common complication of childbirth in pre-antibiotic days.

When Katy died, Daniel was about 30 years old and had 3 children under age 6. In Sedalia, Missouri, he met a young woman from England, six years younger than himself: Elizabeth Hanford Harriman. She had grown up in the same part of England he had, so she knew his background and spoke his language. He desperately needed a wife and mother for his children, and they married 3 September 1884 in Sedalia; Daniel was 31 years old and Elizabeth was 25. When Daniel died in 1928, they had been married 44 years and had 6 children of their own.

Railroads in America were expanding rapidly in the late 1800s and Daniel worked for at least two railroad companies in the Kansas and Missouri area. Sedalia, where Daniel and Elizabeth married and presumably where Daniel worked at the time, had been founded in 1860 as a rough frontier town in the new west. The town’s early economy was built on the railroads, at a time the nation was growing westward and railroads were opening up the frontier. In 1884, when Daniel was in Sedalia, the town was served by the Missouri Pacific and possibly the MK&T (Missouri Kansas and Texas, or “Katy”) railroads.

Daniel and Elizabeth’s first two children were born in Missouri: Dorothy in 1885 and Lillian in 1887.

By 1889, the family had moved to Fort Scott, Kansas. Fort Scott originally was an army outpost on the American frontier and the site of fierce fighting during the Civil War, but now was a growing town and a hub for railroad growth. In the late 1800s, Kansas City was a booming town on the Missouri River. Historical records show that the old town of Fort Scott and the new Kansas City were competing to become the railroad hubs of the midwest, so many railroad companies were building terminals and lines in those cities.

Daniel and Elizabeth moved to Fort Scott with their family: Alice, Winifred and Stanley from Daniel’s first marriage; and Dorothy and Lillian. They had four more children while in Fort Scott: Josie was born 1890; Frances was born 1892; Harold was born 1895; Cyril was born 1897. When their last child was born, Daniel was age 44 and Elizabeth 38. Three years later, in October 1900, Stanley died of a fever at age 17. 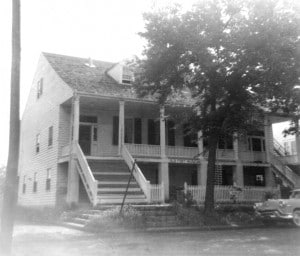 After living in several houses in Fort Scott over the years, Daniel bought a house on Officers’ Row in Fort Scott. The house shown in this picture, which in 1955 was a museum, is either the house they lived in or one virtually identical to it. Years later, Cyril said he remembered an old tunnel that went down to the river that the troops used as an escape route during the frontier days or during the Civil War. On the back of the house photo shown here, written by Viola Fox: “The house Grandpa [Daniel] Fox owned and traded for the farm. Daddy [Cyril] was 6 yrs old when he left there. Was not born there. It was an apartment house at that time and they lived in the upper part . . . . Fort Scott Kansas. House used as a museum now.” [Photo was taken Summer, 1955. Cyril was between 8 and 11 years old when the family left Fort Scott, rather than 6.]

One railroad company active at that time was the Kansas City, Fort Scott and Memphis Line, which maps of 1895 show passing through Willow Springs, Missouri. Probably through his associations with the railroads, Daniel learned of some property in Douglas County, about 640 acres 9 miles west of Willow Springs, and which today is off State Route HH. Between 1905 and 1908, Daniel traded the house in Fort Scott for the Douglas County property; at that time, he was in his early 50s. Down the lane on the property, to the north about a half mile was a log cabin. It was a large two-story cabin with four fireplaces (upstairs and downstairs at each end of the house). They lived in the log cabin with their children until they built a new house on the same land before 1920. 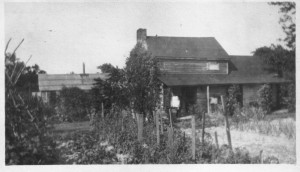 The new house had a library or study with book shelves from floor to ceiling on all four walls. Daniel always had a chessboard set up and he played chess by mail with someone in England. This picture shows the new house about 1922.

Daniel and Elizabeth’s four daughters (Dorothy, Lillian, Josie and Frances) and younger son (Cyril) all married after the family moved to Douglas County. Dorothy was married at the home in 1908. Apparently one of the daughters took up photography as early as 1920 and she may have taken most of the photos of the Fox family shown in this family history during the 1920s.

Daniel died in 1928 at age 75. His funeral was conducted at the Methodist Church (of Willow Springs?) on Friday, November 23 at 2:00 pm under the auspices of the Masonic Lodge. He was buried in the Willow Springs Cemetery, Willow Springs, Missouri. His gravestone reads: “Fox, Daniel L. 1853 – 1928.” 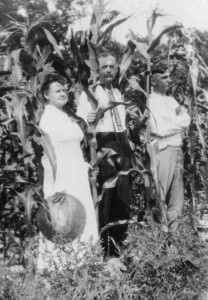 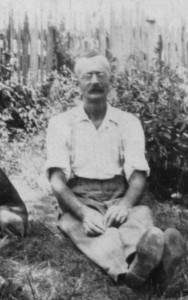 Daniel Fox, circa 1920 on his farm near Willow Springs, Douglas Co, MO. 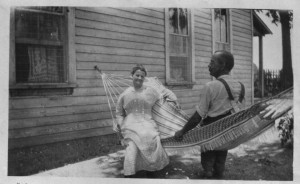 Daniel and Elizabeth beside their house

Funeral Notice:
The funeral of Daniel L. Fox will be held at the Methodist Church Friday afternoon, Nov. 23rd at 2 p.m. Rev. Harpe will conduct the services under auspices of the Masonic Lodge.”

Family tradition:
Daniel brought two of his children with him to America.

Information provided by Randy Fox:
Daniel was a very smart, self-made man. He owned a general store in Hebron Missouri and his philosophy was to read a book a week.

Information provided by Dr. Mary Griffiths:
Daniel was born in Brimington, Derbyshire, England. Mary’s cousin Hubert Rendell once wrote that he thought Daniel and his first wife Katy were married at Mount Zion Chapel in Chesterfield, two miles from Daniel’s birthplace in Brimington. Hubert also wrote that Katy died from infection, which was very common in pre-antibiotic days, soon after Stanley (their fourth child) was born. Dr. Griffiths may have letters written in 1914 by Daniel in the United States to his younger sister, Florence Lois, in England.

Information from Elizabeth Fox’s obituary:
Elizabeth came to the United States in 1882, locating near Sedalia MO, where she met and married Daniel Fox in 1884.

Information from NRHS:
“The Car Foreman was in charge of the staff that made repairs to freight and passenger cars. This could be any part of the cars such as couplers, wheels, brakes, doors, etc.” From: Ray Cooney, Library volunteer

[Response to my inquiry about the “Ft. S. W. & W. Ry” and whether it had a line through Sedalia, MO] “The Fort Scott, Wichita & Western ran from Fort Scott from 1881 to 1887 when it became part of the Missouri Pacific which in turn is part of the Union Pacific today. An “Official Railway Guide” we have for 1884 shows only the MAP as serving Sedalia, MO.”

Information from Missouri-Pacific Historical Society:
The car department foreman “would supervise the carmen, painters and carpenters working in the railcar repair shops or supervising the building of new railcars or cabooses. The job was a union position but a higher grade and higher paid job than a carman.”

City directories show Daniel and Elizabeth lived in several houses in a small suburb north of Fort Scott called Belltown before moving into a house on Officers’ Row at the fort. The directories show Daniel’s addresses when the directories were published, but it is not known when he moved to the houses. According to these directories, they lived at 220 Humboldt Ave in 1889; Walnut Hill in 1893 (part of Belltown); 817 Marian Ave in 1896; 121 N Judson in 1898; 108 N Judson in 1902; then 119 Blair Ave in 1905 (a boarding house, formerly officers’ quarters at the fort). It is not known whether Daniel owned or rented any of these houses, including the boarding house on Blair Ave, though the writing on the back of a photo of the house, written by Viola Fox, indicates Daniel owned the house at 119 Blair Ave.

To download a free chapter from any of Larry’s books and receive periodic email notices of his articles, books and other materials, subscribe to our opt-in email list. We will protect your email address, not share or sell it. You may unsubscribe at any time.